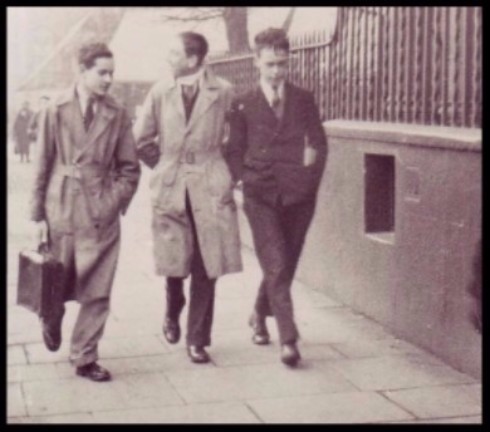 "Put your muse on a leash, the bitch, she's running away from you and tends to chase rabbits."
Some heplful advice found in one of Dan's old exercise books. Attributed to R.K. Robertson, Dan's teacher to whom he dedicated The Opera House Murders

BBC Yorkshire Inside Out

In the church in Soragna, BBC Yorkshire Inside Out Team, Jane Birch, Lucy Hester and Mark Graham, along with Jodi Weston Brake, Dan's niece met members of the Meletti family. Caterina Sassi Meletti, a soprano, who had been picked to sing for the Pope when she was 15, sang in remembrance of Dan, David, Dino and Nerina.

The church was wonderful and with the backing of the local choir, her voice was truly beautiful and moving.

The Mayor of Soragna, Salavdore Iaconi Farina invited us to the Town Hall . . . the people in the pictures are all related to Dino and Nerina and many had come a considerable distance for this occasion.

The Mayor gave a long speech telling Dan’s story and the story of the Melettis and other partisans’ courage and kindness.

Germans and Italian fascists neighbours had put guns to their heads and shot many. In sheltering Dan and other British soldiers these amazing and unselfish people risked their lives and the lives of their children. But, incredibly, when the course of the war changed and the German soldiers and the fascists were in trouble they then took them in and kept them safe too.

They thought of them, as other human beings, other mothers’ sons, and tired of fighting they had no wish to see them dead .

The mayor of Soragna, Iaconi Farina, recalled this incident of the war period and emphasized the importance of the gesture made by Dino and Nerina Meletti: "A gesture - he said - made of courage and of altruism, which had alleviated the sufferings of the two soldiers. A gesture which deserves to be singled out and passed on to future generations as civic education of which all of Soragna can be proud " 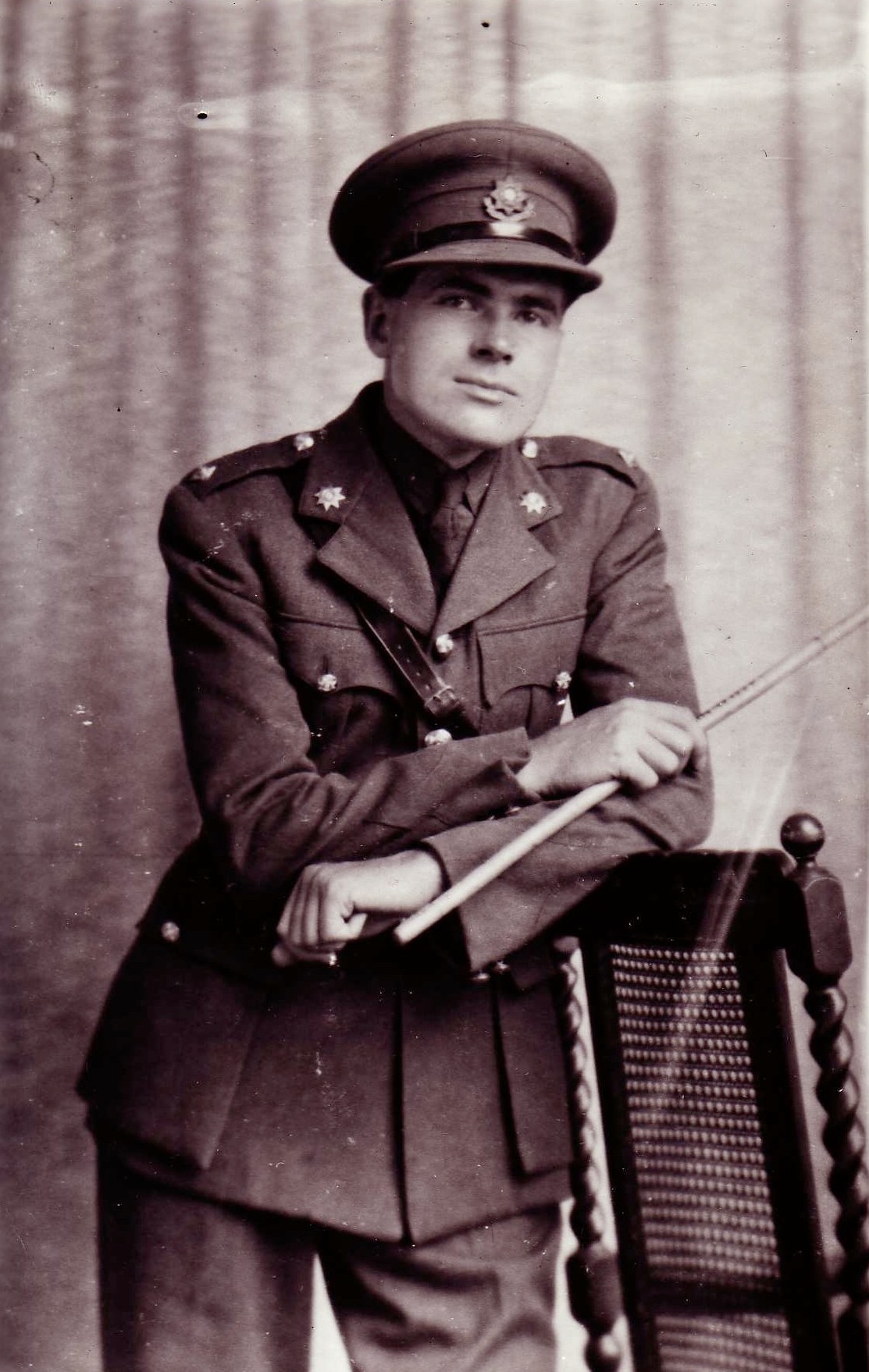 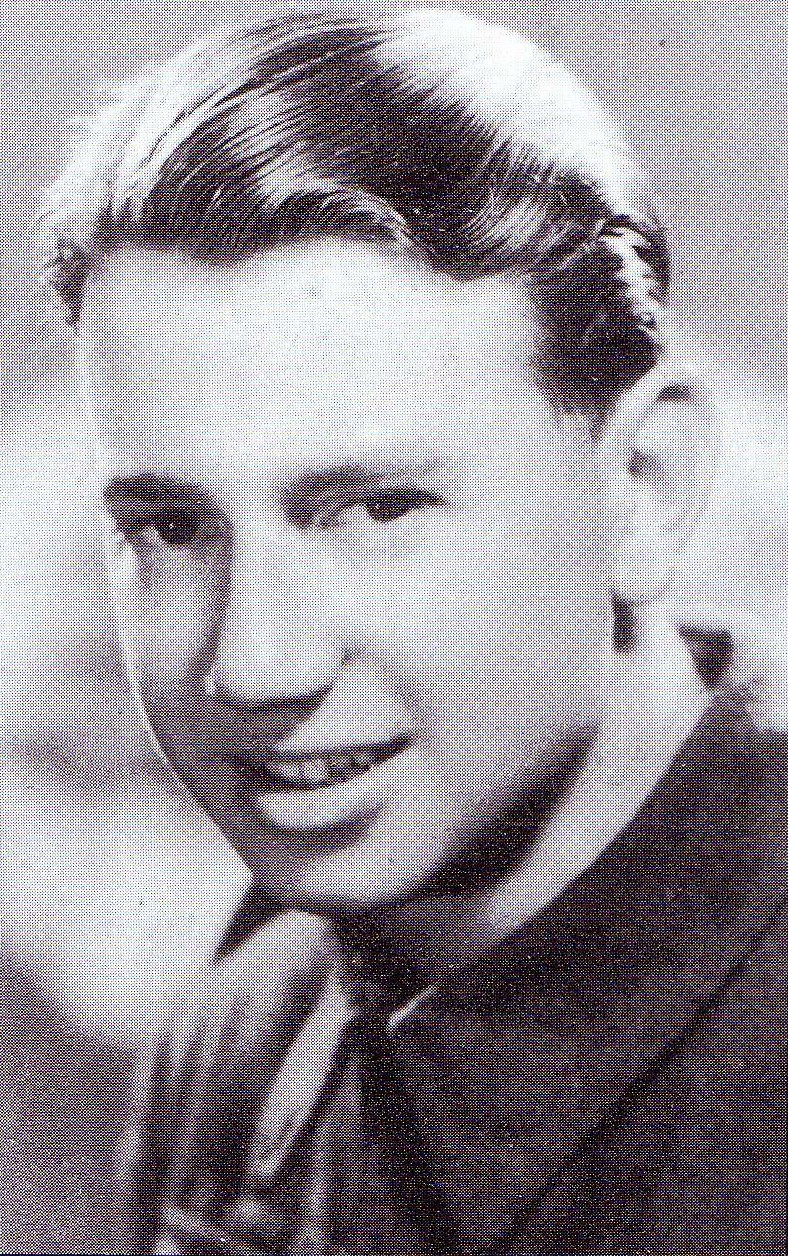 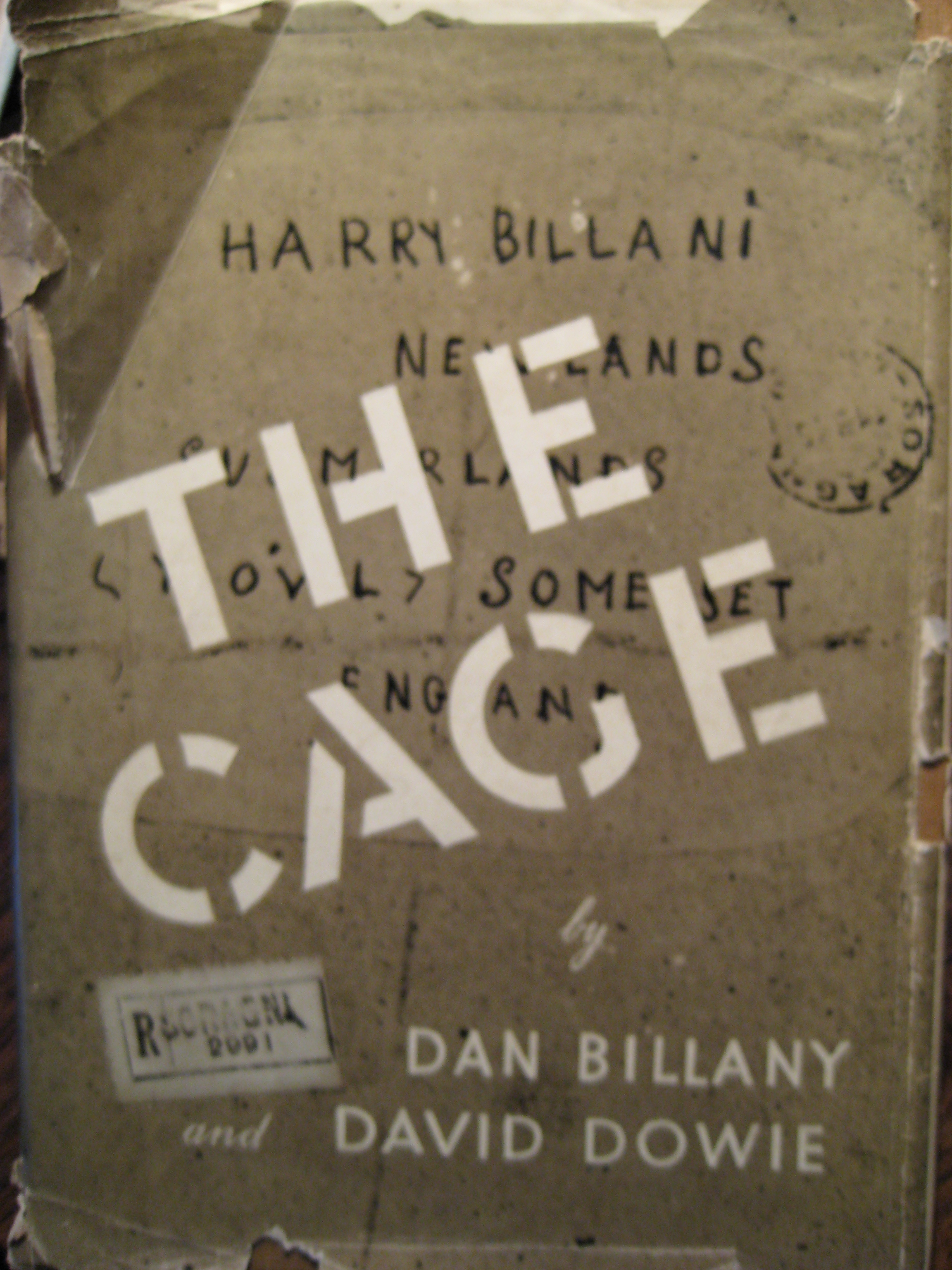 The Cage by Dan Billany and David Dowie.The manuscript left in safe keeping with the Melettis.
prev next

BBC Inside Out Yorkshire in Capistrello December 2010

Jane Birch(producer), Lucy Hester( presenter), Mark (cameraman) and Jodi Weston Brake(Dan Billany's neice) visit Capistrello. A chit signed by Dan, David and Alec Harding was left here, and it is the point where Dan and the others were last known to have stayed.

I have not, as yet, managed to find out where, or who Dan and the others stayed with. The chits are in the National Archives, Washington, and this information comes from Roger Absolam’s research.

Unfortunately the translator was ill and could not make the journey, this would have helped, and, I also feel that if I do some more research and spend time in Capistrello, it being a fairly small community, it will be possible to find out more.

We arrived very late and a local restaurant kindly stayed open for us; and it was Maurizio, who worked there who gave up his one day off a week to help us. With Maurizio as our guide we saw what Dan and the others were up against in Capistrello.

From the pictures in the file you can see what they were facing.

When Capistrello was bombed the local Italians and ex PoW’s they were looking after would hide in the railway tunnel pictured. There was attacks/bombs from all sides - American, British, German and Italian Fascists.

In one picture you will see a large villa in the centre of the hill. The Germans used this as a base. Most of the other pictures are self-explanatory—for Dan, the journey that lay ahead was not an easy one. 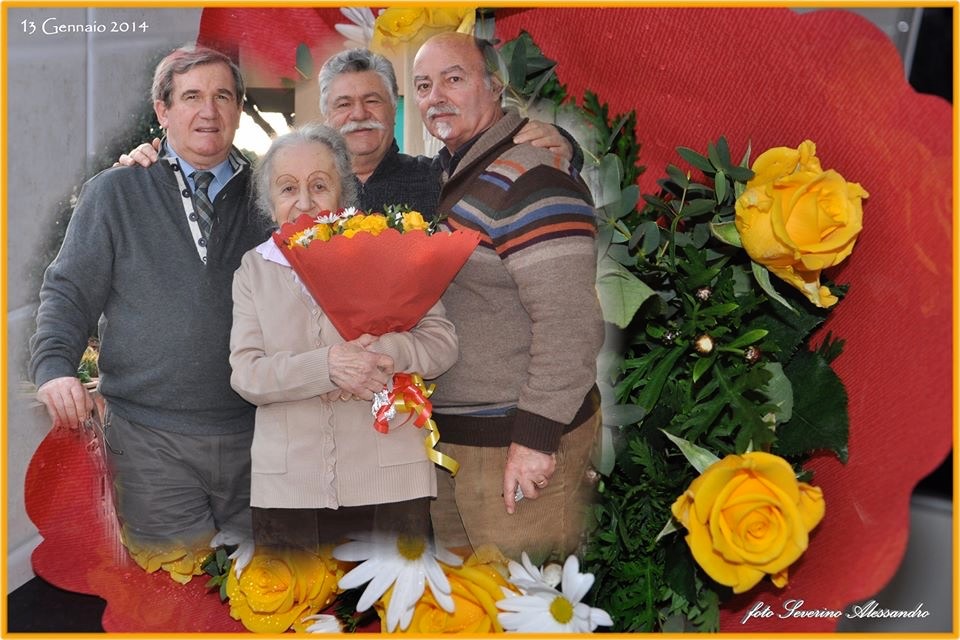 the Wife of Vincenzo Luciano who with her husband put themselves in grave danger helping the Allied soldiers like Dan. 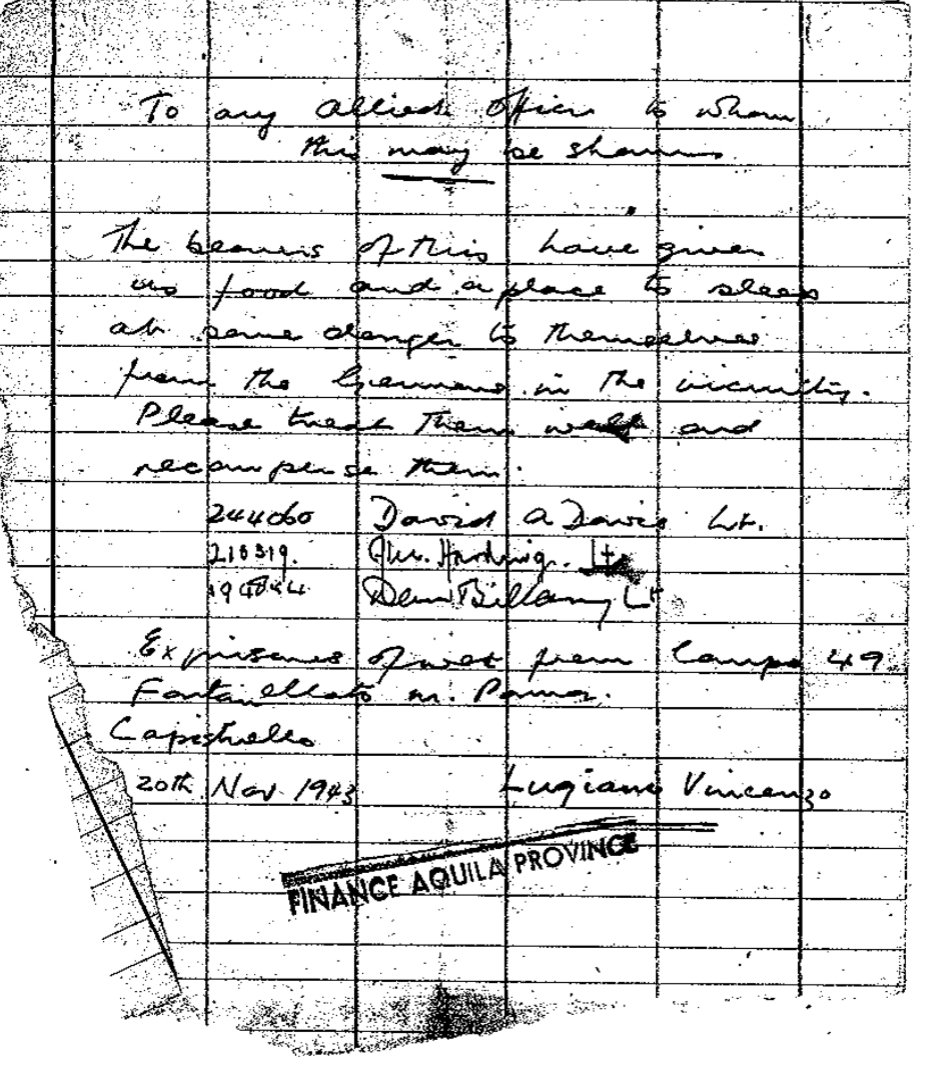 To any Allied Officer to whom this may be shown

The bearers of this have given us food and a place to sleep at some danger to themselves from the Germans in the vicinity.

Please treat them well and recompense them.

Ex prisoners of war from Campo 49, Fontanellato near Parma.

The Last Chit left by Dan Billany and his friends David Dowie and Alec Harding in Capistrello with Luciano Vincenzo. The people of Capistrello suffered terrible repercussions from the Germans. 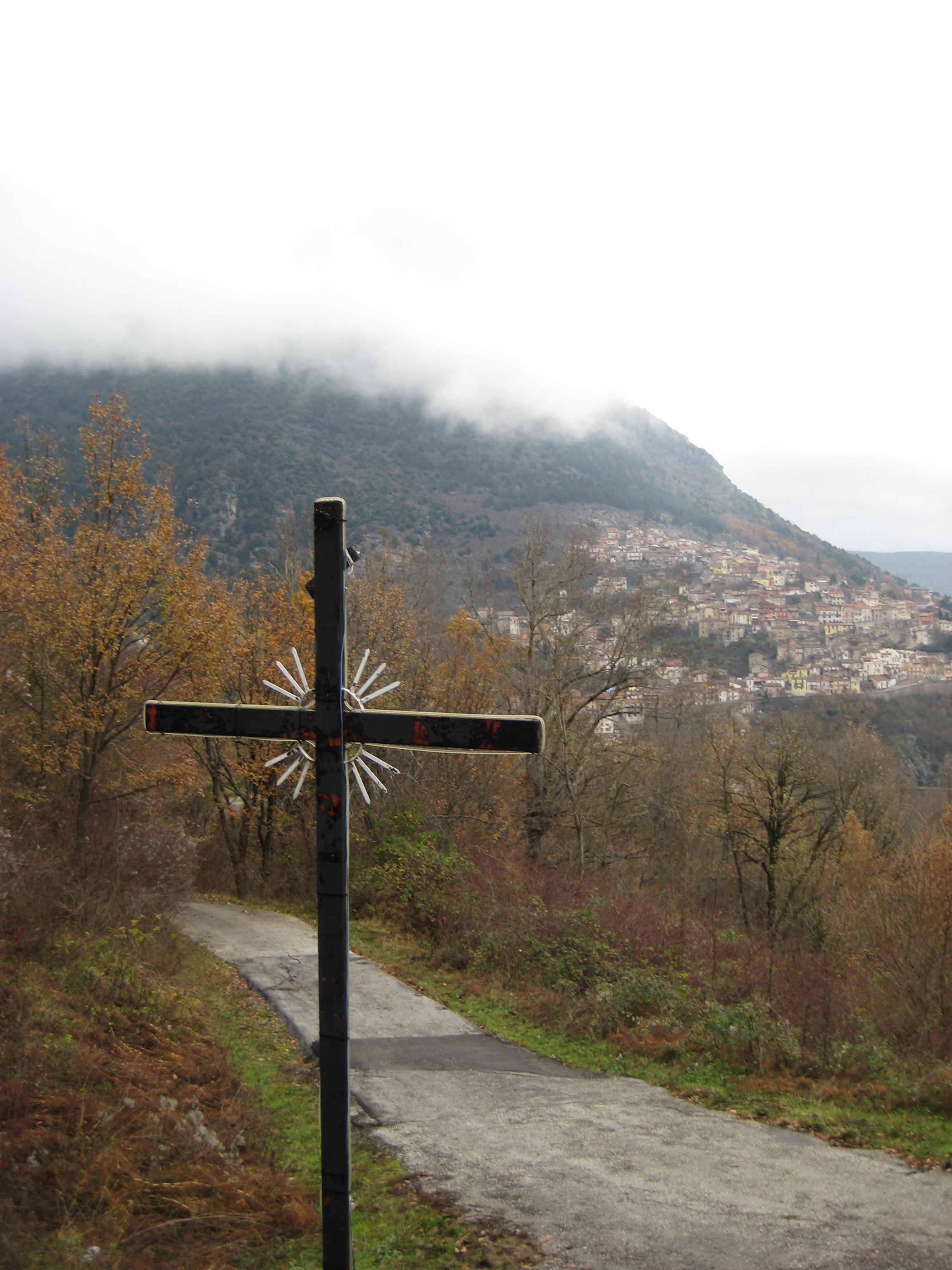 Capistrello.
Please click on this image to read the story of the Martyrs of Capistrello

Victor Chandler, one of
the original boys from
Dan Billany's Standard
Three meets the boys in
Barrie Wheatley's play
The Magic Door

The story of Hull’s Dan Billany [1913-43] has been posted previously in ‘A hero of his time and ours’ It is appropriate, therefore, that in time for Hull Pride on July 18th, we have received this message of support from Dan’s niece, Jodi Weston Brake,
“I wish I could be in Hull for the Pride event . Dan would have been so PROUD. How times have changed.”
How indeed
Writing in the late 193os ,when any expression of male homosexuality was illegal, in one of his detective novels ,Dan writes of the reality of gay love then .
“it was a kind of love which,in te world as we know it,could not be made public. Rather commit suicide...Many have.”
And a little later,writing of the very real risks that gay men were at from blackmailers [the anti-gay laws were accurately described as a ‘blackmailers charter’ ]
“Unhappy devil ,Mrs. Valentine [the blackmailer] had found a way to make the very honey of his life into poison to buy her brandy and run her Daimler.”
Turning honey into poison —-that was the reality of the effect of the cruel prejudices and discriminatory laws of numerous gay men of Dan’s and later generations Without their sacrifices we would not have such freedoms as we do today.
And that is why it is so important that those convicted under gross indecency and other anti-homosexual laws should be exonerated–and why we are launching our petition at this years Hull Pride.
Who can doubt that Dan would have been Proud to be marching with us on July 18th? And he would have been utterly amazed to tune in to West Hull FM at 8 on a tuesday evening to hear Danny Norton announce ‘This is ‘Loud and Proud’-for West Hulls’ LGBT Community; being beamed out over his birthplace on Hessle Road. The ‘love which in this world could not be made public’ is now very public indeed!
Yes—-Dan would have been proud of his native city of Hull and its LGBT Community. t
On Hull Pride Day on 18th July a wreath will be laid at Hulls Cenotaph in Hull in honour of all those LGBT servicemen and women who gave their lives defending our freedoms. As Dan’s niece says in a message to Hull Pride, “Their bravery needs to be acknowledged.Caught between the devil and the deep,and so much to fight for-what Hitler would have done to the Gay Community ,given the chance, does not bear thinking about . His track record gives us a terrifying insight
“What a different world we would be living in if it wasn’t for the selfless bravery of all who fought.”
All the braver one might add when they would have been denied the most basic freedom to give expression to the love that they felt for their own sex had they survived and returned home. And which they would have been discharged from the services for until the year 2000. Despite all that they gave their lives for us.
We are PROUD of all of them
And We Are Proud of Our Dan

Within his short life Dan never lived to see a world more understanding of his true nature. Had he done so I believe that he would, in his writings, been as great a champion of Gay Rights as he had been of other oppressed groups. Because of the harsh times that he lived in, however, he ended up fighting for everybody but himself
. 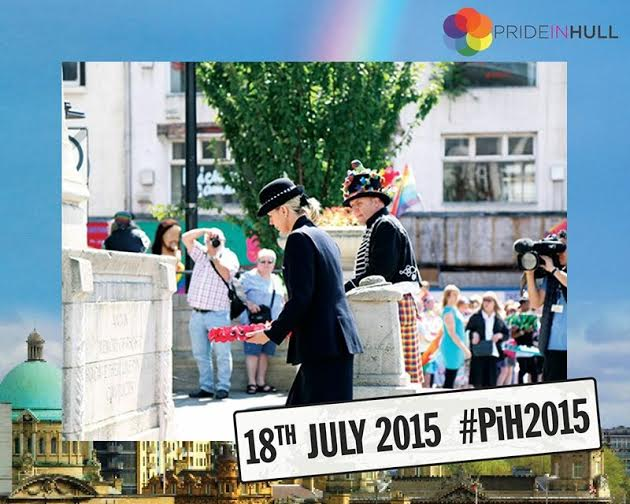 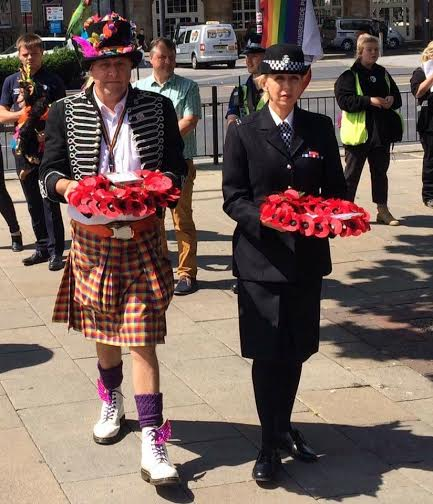 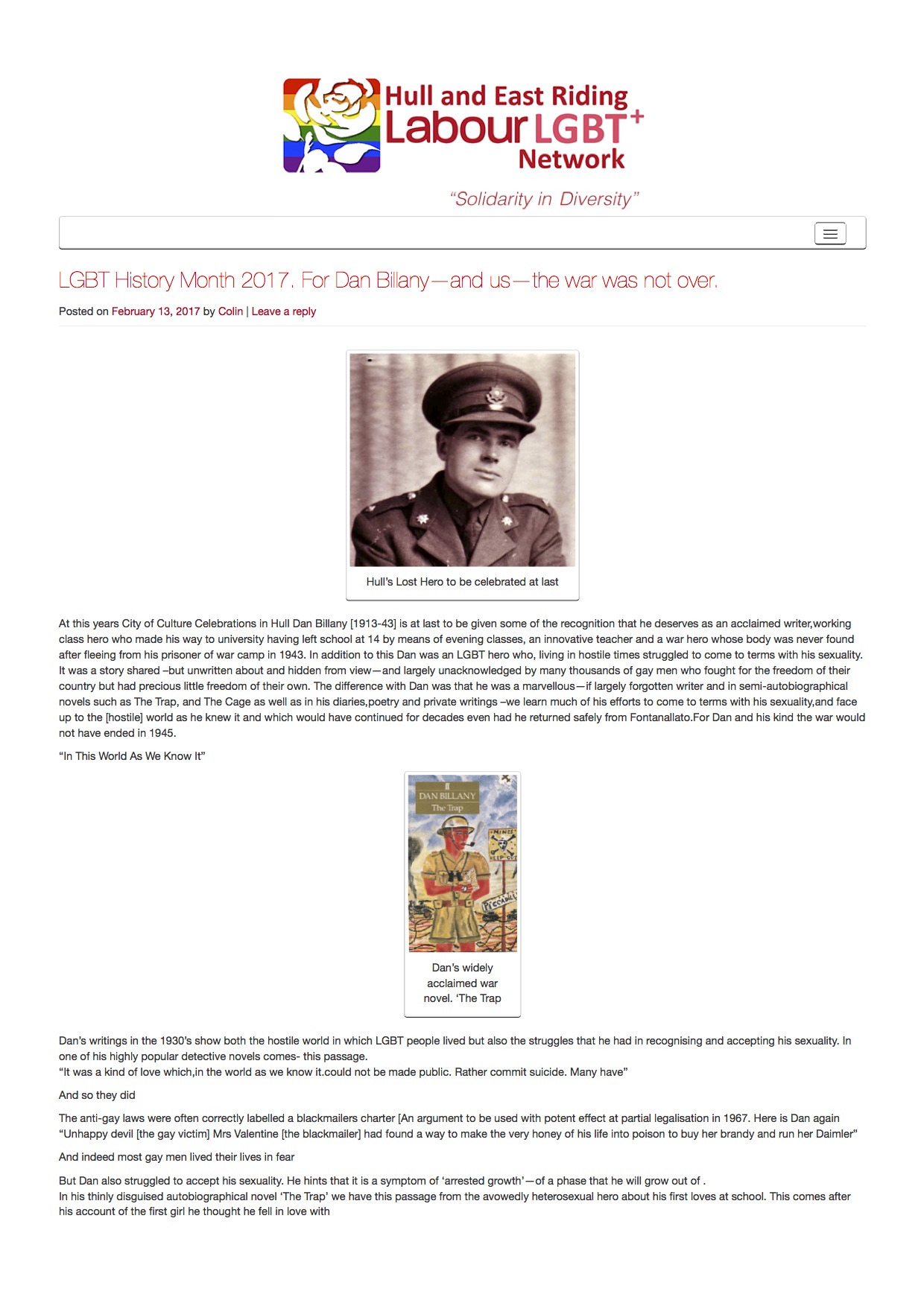 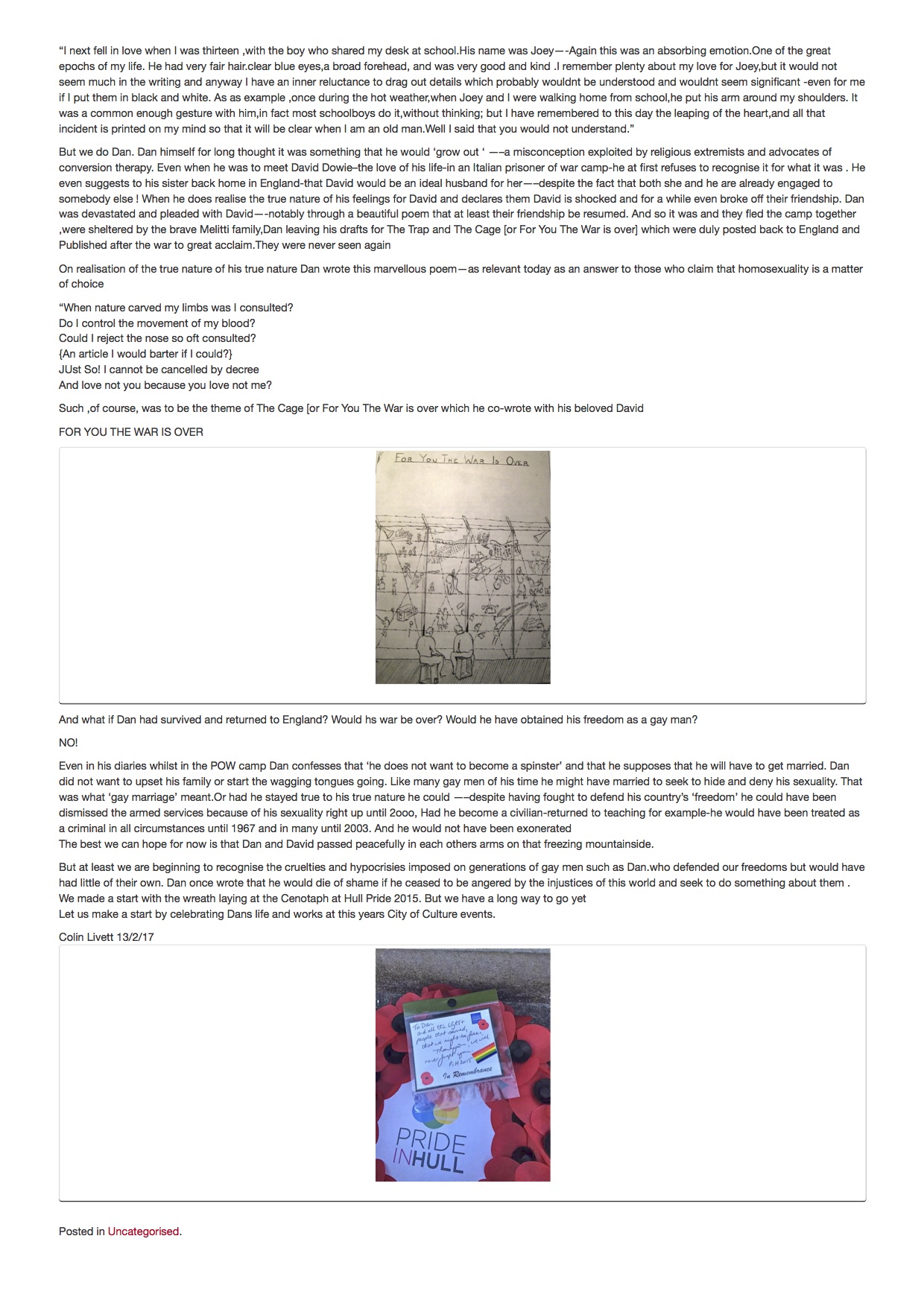 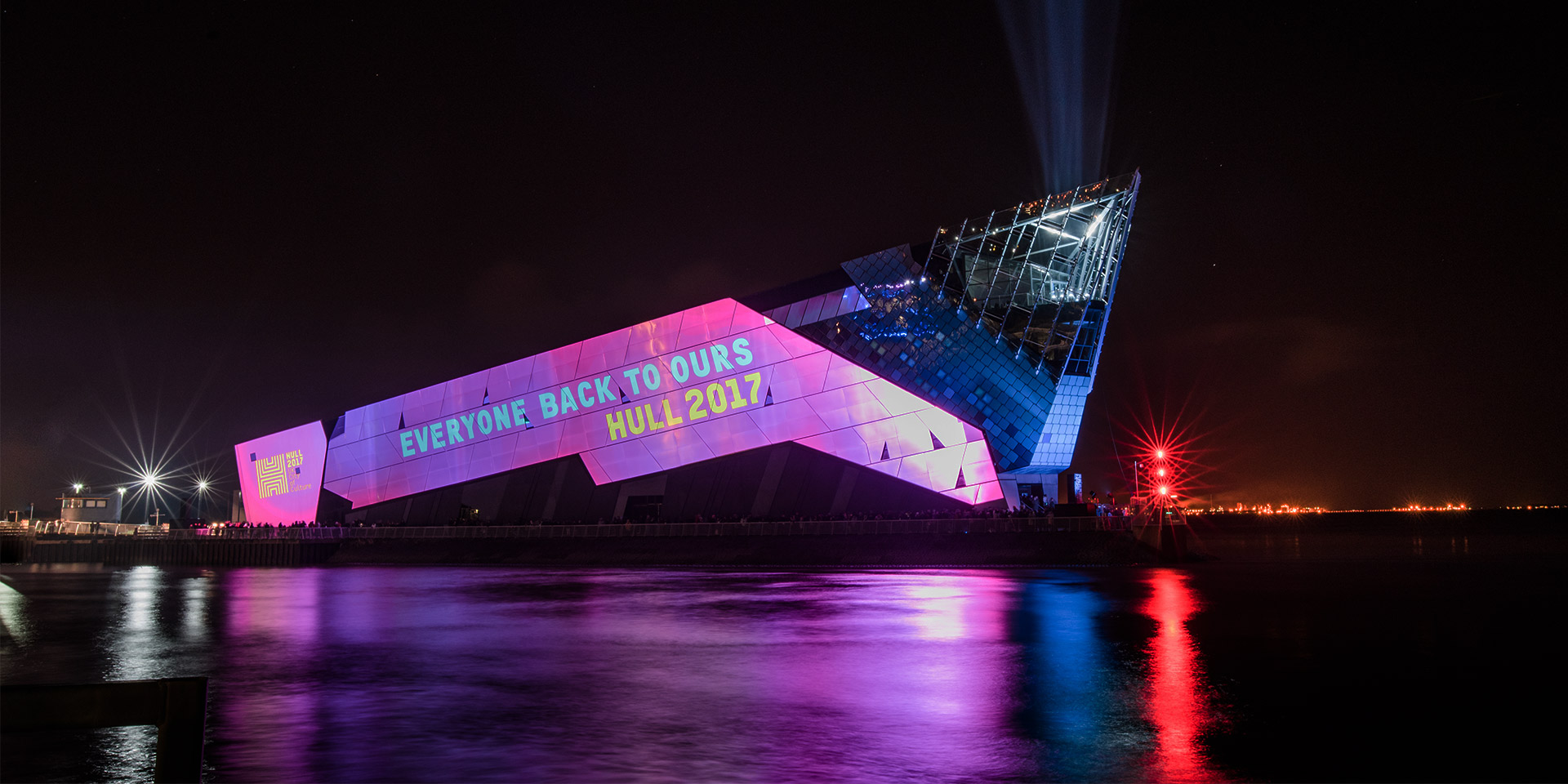 THEATRE ON THE EDGE

2017 CITY OF CULTURE CELEBRATIONS DAN BILLANY: MADE IN HULL

In the 2017 City Of Culture celebrations it is appropriate to remember a forgotten hero of Hull. Hull teacher and writer, Dan Billany disappeared without trace in World War Two, but left behind the manuscripts of two novels, The Cage and The Trap, that became international best sellers.

The Trap was hailed as a wartime classic; said by one critic to be one of the most powerful English novels to come out of the war. The Cage tells the story of Billany’s relationship with fellow POW David Dowie, who also went missing. 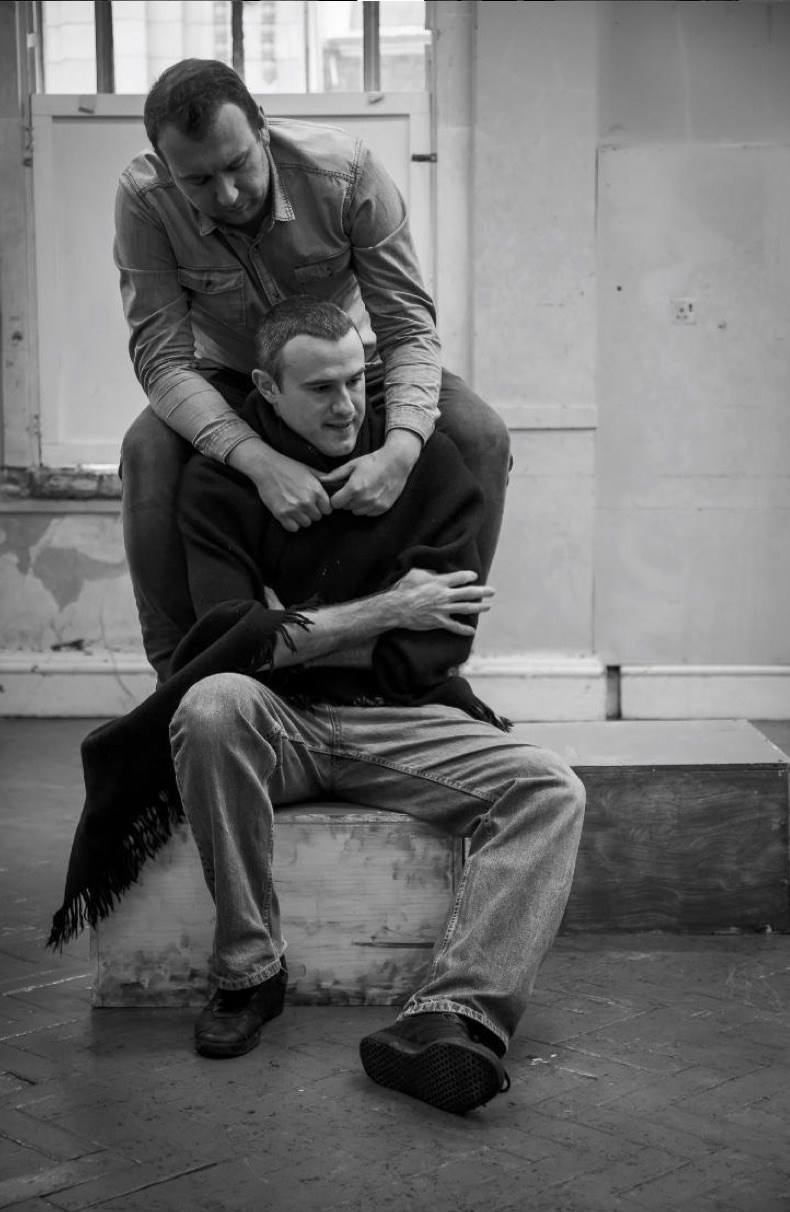 Billany has become known for his freedom of thought and his life as a rule breaker.

Our March productions at Hull History Centre and Kardomah 94 bring the man to life on stage through readings, drama, music and multimedia

DAN BILLANY: MADE IN HULL can be seen at Hull History Centre on Saturday March 4th at 2pm.